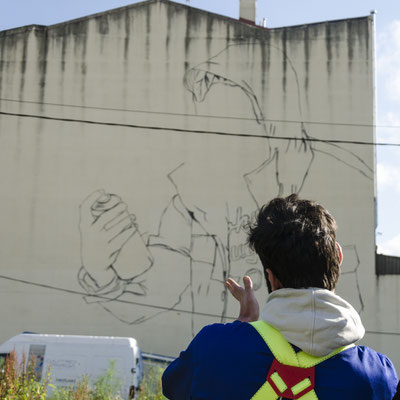 Sekone is a multidisciplinary Galician artist who embraces different languages: drawing, painting, graphic design and mural painting. His ongoing curiosity pushes him to explore different pictorial means, which results in an obsession for the detail and the perfection of the technique, going from one medium to another and creating a discourse based on nostalgia, the absurd, the daily routine and his own vital and creative intimacy in equal measure. Sekone began painting graffiti in 1996 in Vilagarcía. He currently lives in A Coruña, where he moved to study Illustration and Advertising Design. After several years working as a designer in the textile sector, he resumed his artistic career in full, participating in countless street interventions, while also taking part in solo and collective exhibitions; he is also an urban art workshop facilitator. His latest solo exhibitions were “Nin si nin non nin branco nin negro”(2014), at the Sala Municipal de Exposicións Salvador de Madariaga (A Coruña), “Que está pasando” (2015) at the Monty4 gallery (A Coruña) and the collective exhibition “Somos mar” (2015), at the Palexco exhibition hall (A Coruña), within the Mar de Mares Festival.